"When my drinking became a problem..." Max's Story

We've been talking to people whose drinking has affected their life and their work - here's Max's story...

It’s difficult to say when my drinking became a problem.

I started drinking in my late teens - was it then? I don’t know, though that was when people first commented on it. But I passed my A-levels and went to university, got a degree and a job. It wasn’t a problem then, was it?

In my early twenties, I was drinking every night, usually at home by myself, but then I changed jobs and the people I worked with often went to the pub at lunchtime. So, pleased to have some company to go with I wholeheartedly jumped onto that bandwagon.

That set a pattern for me though, I’d drink at lunchtime with work colleagues, often after work and then at home as well. But I’d stop for periods of time, without too much difficulty it seemed, so it wasn’t a problem was it?

Then my relationships started to breakdown, so I found myself alone, drinking at lunchtimes with whoever I could find to go with and in the evening alone at home. Slowly but surely my drinking increased from heavy, through very heavy to dangerous and life threatening.

At the end of my drinking, I had to drink before I left home for work in the morning. Then, when at work find a pub that opened at 11 am to get a couple of pints and go back to work with the shakes eased a little. Then I’d be back out to the pub at lunchtime and again in mid-afternoon. I would go home as soon as my work was done, or more truthfully as soon as I’d done as little as I could get away with and drink in the pub until closing time and more again afterwards at home.

This pattern was repeated daily for years. I knew I was dependent on alcohol by this stage and needed to stop, but could not imagine what life would be life without drinking.

That started to change during 2004, I realised I was slowly, but surely killing myself. I tried to stop a number of times, the longest period was for 2 months in the summer of that year and I’d started to feel better, more healthy and happier, but sooner or later I inevitably forgot what it had been like and started drinking again. I realised, I could stop, briefly, but I couldn’t stay stopped.

Towards the end of 2004, my work had become increasingly concerned about me and my absence record and so referred me to the doctor. I lied when asked about my drinking of course, but they took some blood tests and I knew the game would be up as soon as those results came back.

It was now getting towards Christmas of 2004 and I was dreading Christmas with the family. How was I going to cope? How was I going to hide how much I was drinking? So when the blood test results came back I did something I hadn’t done before, I told the truth and asked for help.

I decided to tell my line managers the extent of my problem. I knew they knew I had a problem, but maybe they just thought “he drinks too much” – I don’t know what I expected, but much to my surprise, they were very supportive. They have an employee medical insurance scheme in place and through that were able to refer me to a psychiatrist. He in turn referred me to a counsellor and my manager allowed me time off to go see them. I think in a large part they were genuinely pleased I was getting help. And then as time passed they could see me getting better.

I saw the counsellor once every couple of weeks at first, then monthly. We talked through my drinking history and he gave advice on tactics to deal with cravings.

He also suggested I try Alcoholics Anonymous - I’d heard about them and I thought that might be a problem, they were quite religious weren’t they? I was and still am an atheist. So we talked about that and after much procrastination one Saturday afternoon - after circling the block 3 or 4 times - I went into my first AA meeting. I expected a group of tramps with string holding their trousers up, what I found was a group of people from every walk of life helping each other to stop drinking and (for me, more importantly) to stay stopped.

With the support of AA (and in the early stages my counsellor and line managers) I’ve managed to stay stopped since 15-December 2004. In that time I’ve slowly put my life back together. From a rented 1-bedroom flat, littered with beer cans, I’m now buying my own home. From a lonely man on his own, I have a partner and a beautiful daughter who was born in mid-2012. And I have a peace of mind I never had when drinking.

My life's pretty full now. I've had some fantastic holidays, gone to music festival and gigs and found new hobbies and interests. Though less so recently, with a toddler to look after! I can do pretty much anything I like, I just don't drink.

Life still has its ups and downs for sure, that’s life. But now I don’t need to drink on the downs or the ups and importantly I don’t want to. 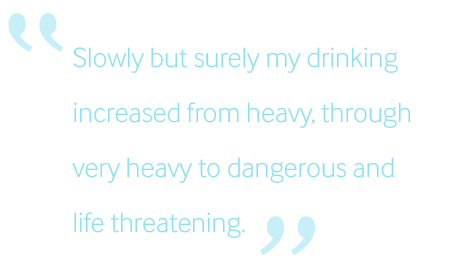 Surviving the Party Season 2022 Guidelines on alcohol Top Tips to Drink Less Alcohol and Cancer Should I give my child a small sip?

TAKE THE DRINK TEST
UNIT CALCULATOR
MY PROFILE
MY GOALS

11 top tips for cutting back on alcohol. https://t.co/RRxonYVHUD

Drinking can increase risk of heart issues by 23%, even in moderation https://t.co/BondygJIZX

Wayne Rooney says he binged on drink to cope with pressures of football. https://t.co/EAW3zYCOyK